Crimson bottlebrush is the most common variety of bottlebrush plants out the fifty different types that exist. 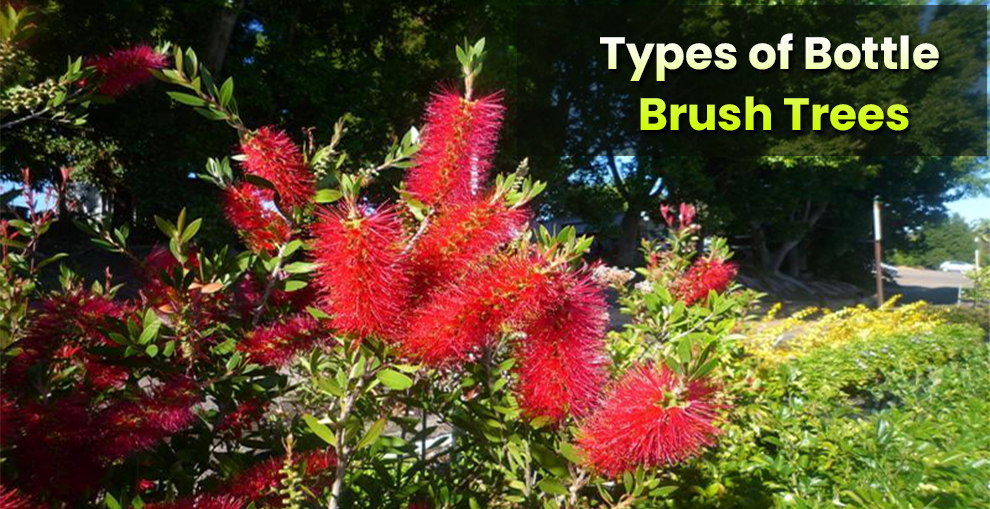 The Bottle Brush plant is christened after its bottle brush-shaped blooms. It can grow as a shrub or a tree. It belongs to the Callistemon genus that belongs to the Myrtle family.

These trees and bushes have showy, soft, red bottle brush-like flowers at the tips of their branches. Their flowers usually do not have petals instead they have these thread like structures. Its long stamens add to the form and color of the clustered flowers. Because of the pollen present on the stamen tips, the flowers appear gold-dusted.

Most bottle brush tree varieties grow in USDA hardiness zones nine through eleven. So, they are hardy shrubs or a tree with attractive and distinctive flower heads. Nectar-loving insects and birds love their flowers.

Moreover, the plant’s ability to tolerate even the harshest gardener neglect makes the plant a viable pick for almost every landscaping project and garden. This Australian native can live in all conditions, from very dry to damp, and in different soil types.

So, do you also want to grow a bottle brush? What are your options? Read below as we discuss the most popular varieties of the bottle brush tree. 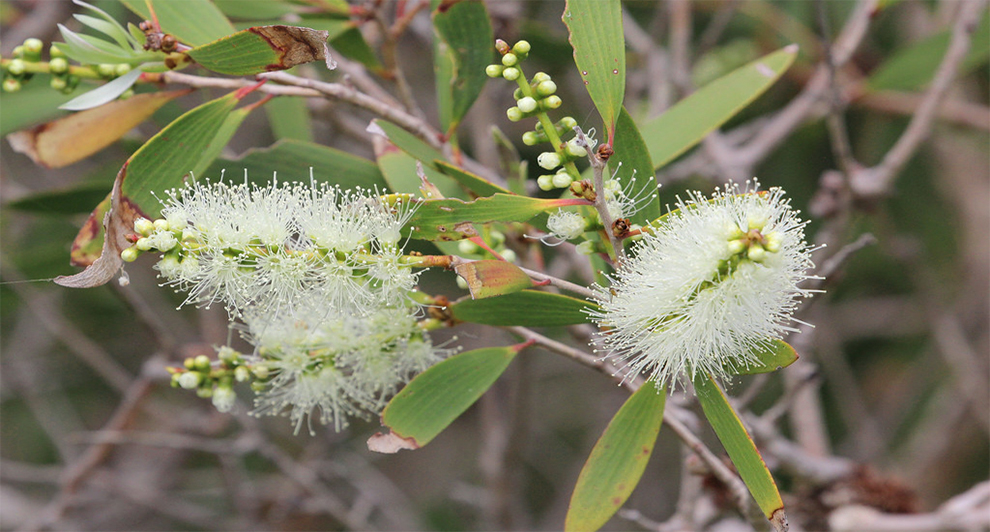 Prevalently seen as a shade tree or a streetside wonder, these tend to grow to fifty feet. Its white flowers and paper bark flowers are excellent landscape addition. The cultivated types can also have red or pink flower stalks, but the plant is known for its white blooms.

They may need light pruning and work well as landscaping trees or hedges. The leaves of these bottle brush shrub varieties resemble some willow species.

Their flowers draw birds and are a prevalent food source for them. It is a drought-tolerant species after it attains maturity. Its established leaves are green, but the new foliage is copper-colored. 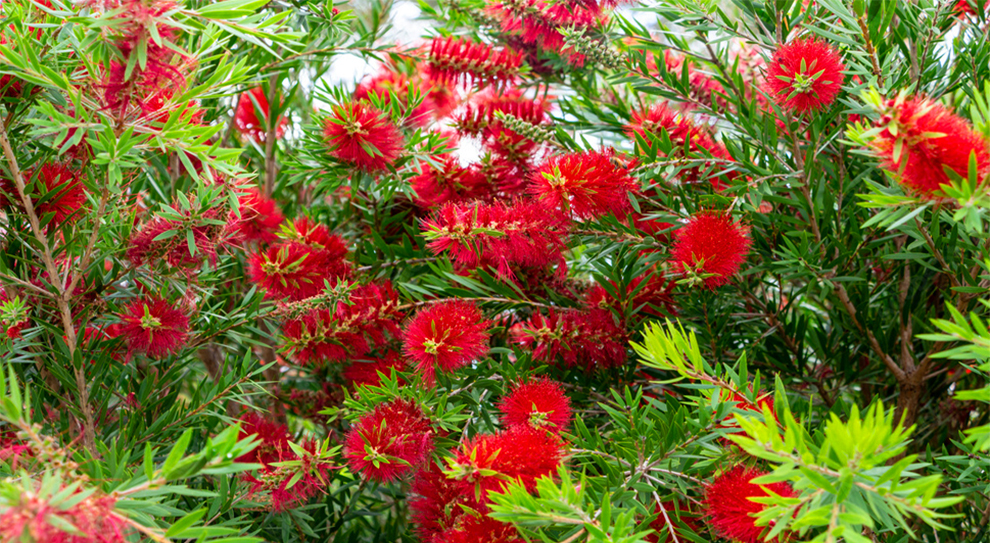 You can easily spot it from its bright red spikes in the autumn and summer. The tree has dense leaves and flowers, making it suitable for hedges. Its branches have an arching habit. The Crimson Bottle Brush can grow as a shrub up to four meters, even in wet conditions.

However, as a plant, it can grow up to twenty-five feet tall. Once it flowers, you can lightly prune it to maintain its shape. The plant can even survive hard pruning. They are drought and deer-resistant. 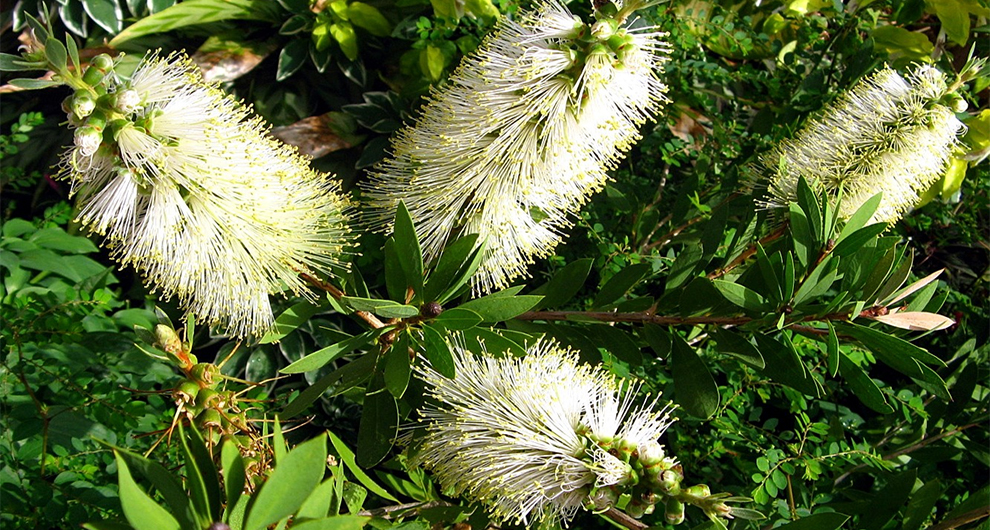 In the 1770s, the plant was taken out of the country and was one of the first incidences in Australia. The lemon bottle brush is one of the top bottle brush tree species that deliver a profusion of attractive crimson flower stalks that blooms all twelve months.

Some cultivar varieties might even yield white or vivid pink stalks. Typically grown as a tree, it gets its citrusy name from the aroma produced by crushing the leaves. This scent is pleasant and similar to the other citrus leaves.

Its leaves produce oil, ensuring the fragrance lingers onto the plant even on warm summer evenings. This plant has a shrubbing habit and usually stays between three to ten feet. People predominantly use this plant to build attractive, colorful hedges, but you can also grow it as a full-sized plant. 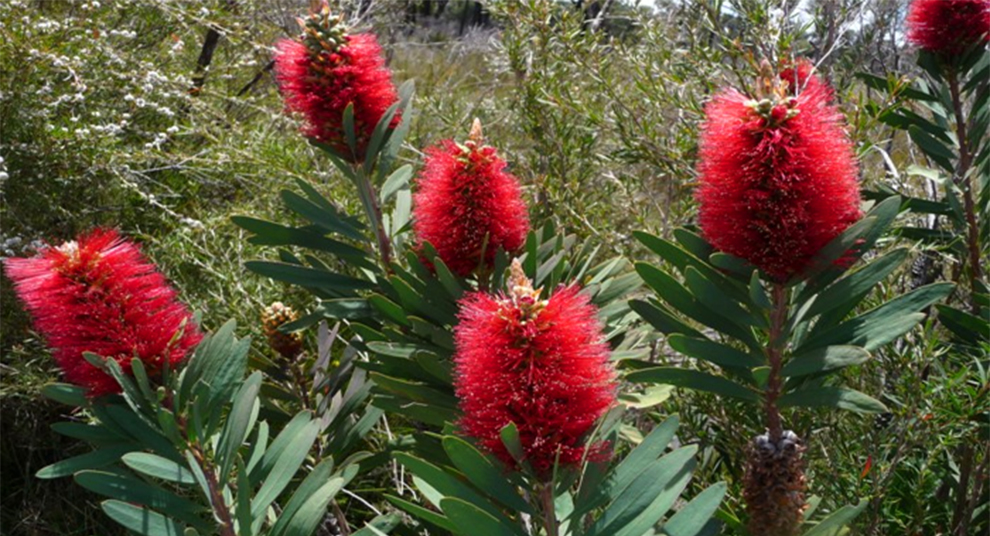 Albany Bottle brush grows best in southwest Australia, where the climate is usually warm. Typically found around the waterways, these have red flowers. Its flowers are stiff and long. They stand upright and have a deep red-pink or bright red range topped with pink and pale yellow specks.

However, this plant is not as self-maintained as the other different types of bottlebrush plants. But you can prune it to give it the desired shape. This plant resembles a shrub and is prevalently grown as an ornamental tree.

However, it stays in its shrubby growth, up to 10 feet in height. The plant has lighter green, slender and long leaves with a bluish tinge and an ovoid shape. 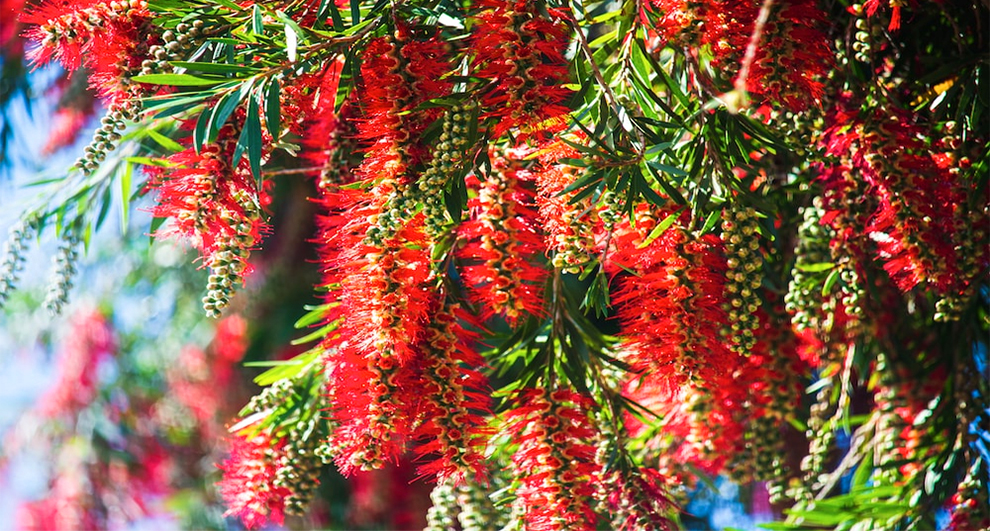 It is one of the most cultivated bottle brush tree types in garden settings and is one of the most popular varieties. You can grow it as a shrub or a multi-trunked tree that grows up to thirty feet. However, its usual height is only between 15 to 20 feet tall with an equal width.

The plant can be a good food source for much nectar-consuming wildlife. The plant has a dense root system, often employed to reinforce the riverbanks because the roots work together to avoid soil erosion.

It is not a frost-hardy variety and can undergo severe damage with salt spray. But, the plant is adaptable and can grow in almost all environments, provided you shield it against the sea or cold air.

This variety is famous globally for its attractive red flowers. People use weeping bottle brushes as a screening or a specimen tree wherever a vertical element is required. 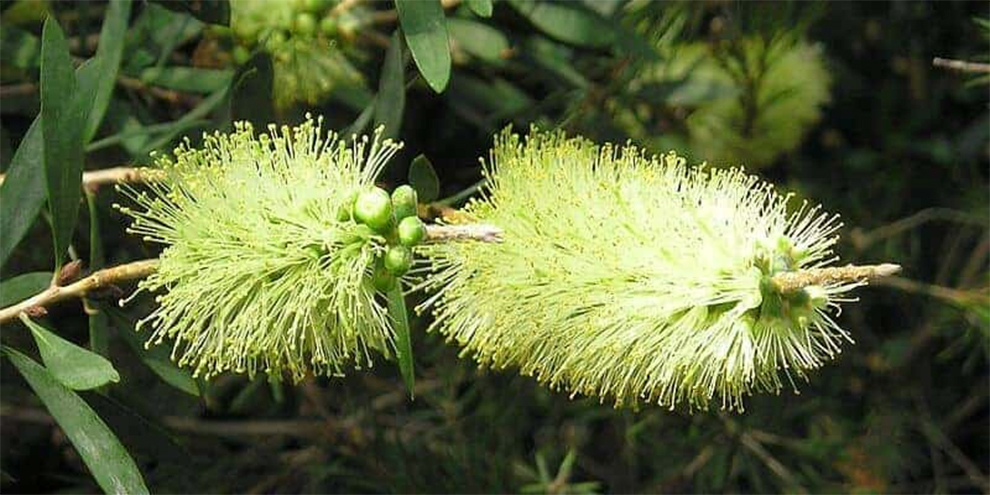 Botanically called the Callistemon formosus, the Kingaroy bottle brush variety thrives in tropical areas free from frost. It primarily grows as a shrub and gets up to three meters. The plant has weeping branches and blooms lemon-hued flower spikes across the year.

But its flowers bloom in spring. It is frost-resistant and prevalent as street trees in Kingaroy, Queensland. The plant has a limited distribution and is prevalent near rainforests and rocky areas. 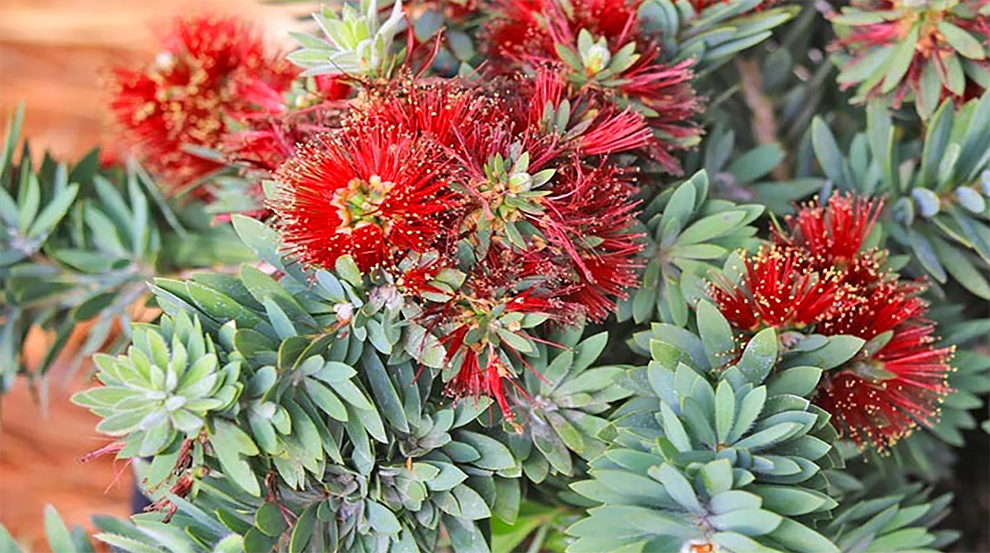 The flower blooms across the year and has elongated spikes enveloped by bristle-like, long stamens, which give them a beautiful look. Its flowers yield nectar, a food source for hummingbirds and birds.

A slow-growing variety, the plant is ideal for smaller gardens. It grows up to three feet tall but has five feet spread. The plant thrives in full sun to partial shade on well-drained, moist, and acidic soils.

Though drought-tolerant, the plant grows well when irrigated regularly. 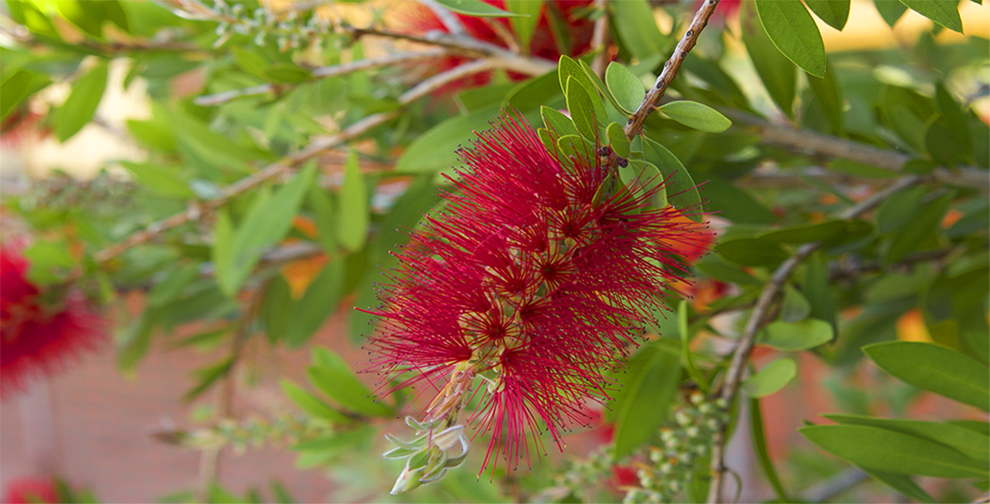 The shrub grows up to seven feet with rigid branches and fissured hard bark. It has alternately arranged leaves about two to six inches long with circular and linear shapes. Its flowers appear in spring, followed by fruits seen as woody capsules. 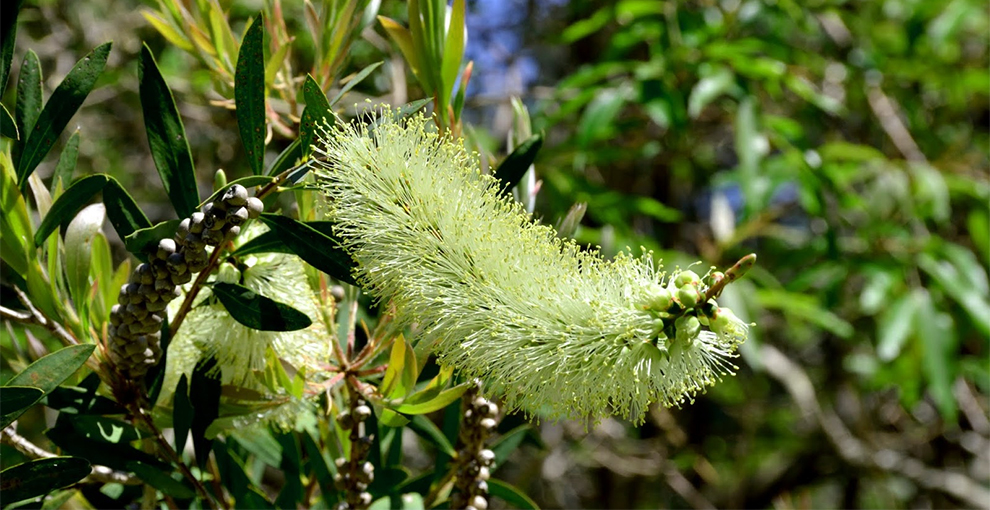 As is apparent, these bottle brush shrub varieties grow naturally at an altitude from 2000 meters down to 900 meters. They are found in and around the swamps and sphagnum bogs. You will also spot them surrounding the Victoria, New South Wales, and Queensland watercourses.

These specimens form dense thickets, typically between 1 and 2.5 meters. Surprisingly, the Alpine Bottle Brush plants grown from the seeds collected from the higher altitude attain a lower height, around a meter.

However, those produced from the seeds collected at the lower altitudes reach almost three times the height. The plant has narrow but sharply pointed leaves and is better suited for wetter areas, but it can be grown in drier regions. It is disease and pest-resistant.

Also known as Scarlet Bottle Brush, Prickly Bottle Brush belongs to the Myrtle family. These bottle brush varieties are endemic to South Australia, Victoria, and New South Wales. It is a small tree or shrub with show green and red flowers and narrow leaves, making it the perfect ornamental plant for temperate regions.

It typically grows between five to thirty feet with a rigid habit and a hard bark. The plant’s linear-shaped leaves are alternately arranged. It blooms from September to January, followed by fruits resembling woody capsules.

The Green Bottle Brush is a variety that usually stays on the smaller side. As is apparent, it is a green-hued plant that grows between three and ten feet. The plant blooms from May through December in shades ranging from pale green to white or cream.

Each flower has light yellow tips, giving it a multi-layered attractive hue. Its new leaves are silvery, but as they age, they darken to a medium green tone as opposed to the woody, dark bark.

Unlike the other different types of bottle brush trees, the Green Bottle Brush yields egg-shaped leaves, and their narrower end leans towards the stem. 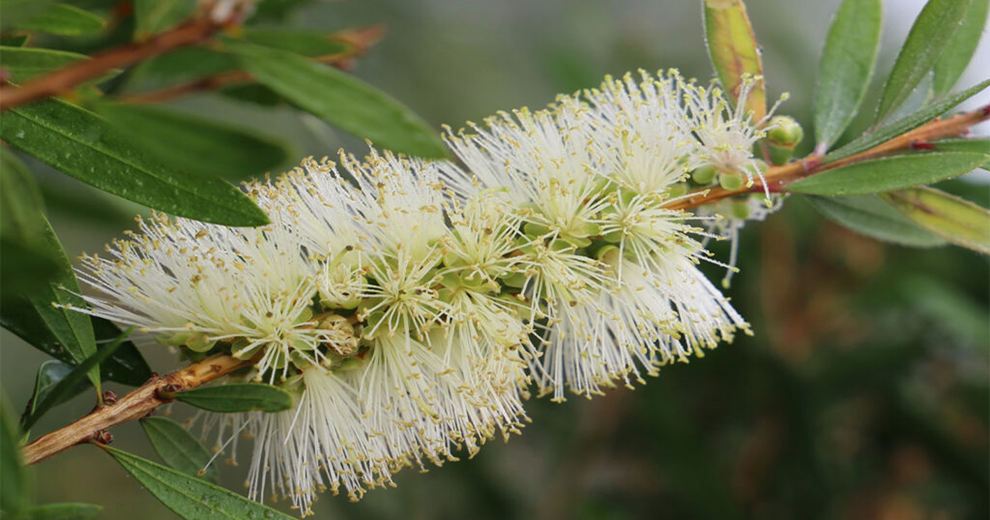 Prevalently found as a shade tree or the street side tree in the park, this bottle brush variety grows up to fifty feet. Its white flowers and paper bark are beautiful additions to the landscape.

The cultivar may have red or pink flower stalks, but it is known mainly for its white blooms.

Its leaves look much like the willow species, and the creamy white flowers are a food source for many birds and insects. 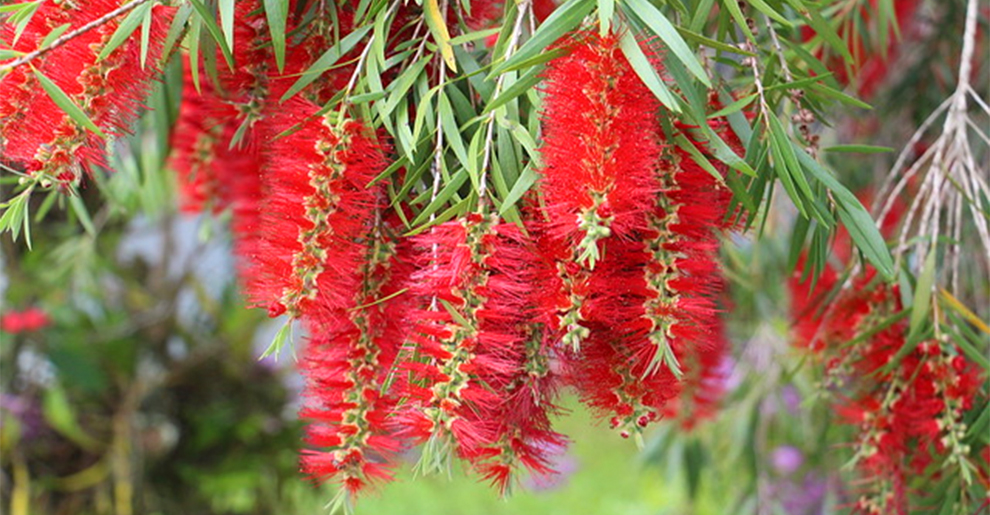 Also called the pine-leaved bottle brush, the stiff bottle brush has had several botanical names. It is mainly because of the confusion of the cultivar names with the botanical name. The base species for these bottle brush tree varieties have linear-shaped leaves, about ½-inch wide.

However, the other cultivators marginally vary in leaf shapes. The plant yields vibrant color spikes, but the narrow-leaves type is suitable for people who reside in swampier or damper locations. Though widely cultivated. You will spot it in the roadside plantings over the garden environments.

Ans. There are several different types of bottlebrush plants, but almost all of them thrive in full sun. Of course, they can tolerate part shade, but that will stunt their growth, and the plant will not bloom much.

Thus, you must grow your plants in a spot that receives at least six to eight hours of sun daily. Loamy soil works best for plants, but they are not very picky when it comes to the soil.

Ans. Most of the bottlebrush trees are fast growing and do develop rapidly.

Ques 3. What are the bottle brush tree problems?

Ans. Bottle brush trees do not like the cold weather. So, the chilly weather might often result in the leaf browning. But fret not! If the plants are alive, it is reversible. You can cover burlap or plastic around the plant during winter. It helps keep the plant warm.

Beyond this, some pests and diseases can affect the bottle brush plants. These include:

Ques 4. What are some of the bottle brush trees uses?

Ans. Here are some of the top uses of all types of bottle brush trees:

Ans. Bottle Brush plant is not poisonous to dogs, but you must not confuse it with Buckeye bottlebrush. Buckeye tree is poisonous to pets.