Different Types Of Hazelnut Trees & Species To Know About

There are hundreds of hybrid hazelnut trees developed from the three most common hazels i.e. American hazelnut, European hazelnut, and beaked hazelnut. 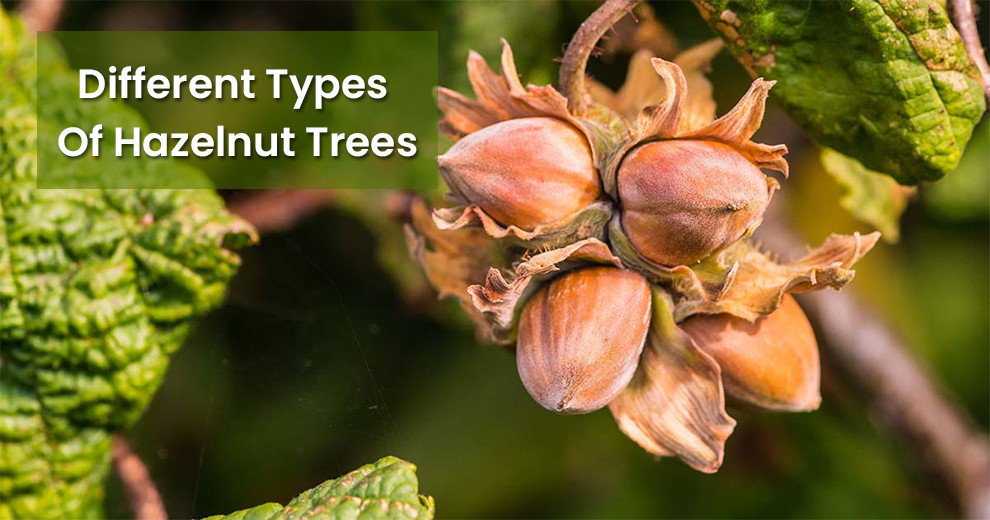 There are many species of hazelnut trees or hazels, most of which yield edible nuts. The hazels are large shrubs and deciduous trees that belong to the Corylus genus. The hazels belong to the Betulaceae plant family, prevalently known as the birch family.

Broadly, there are over three-hundred types of hazelnut trees, particularly in North America, Asia, and Europe. But, there are three species that the Hybrid Hazelnut Consortium keeps working on to create newer varieties.

It includes the native American species, beaked hazelnuts and the European variety. The idea is to combine the best attributes of these varieties to yield a commercially viable hybrid hazelnut.

But, some botanists like to put some hazel species in a different family, Corylaceae. However, hazels are mostly considered a member of the birch family. Native to the temperate northern hemisphere, the hazels are primarily famous for the nuts they yield, which are called hazelnuts.

Are Filberts And Hazelnuts The Same?

There is no difference between hazelnuts and filberts. The two words mean the same and are used interchangeably.

There are various hazelnut species, and most of them yield edible nuts. In this article, we will take you through the most prevalent kind of hazelnut varieties. 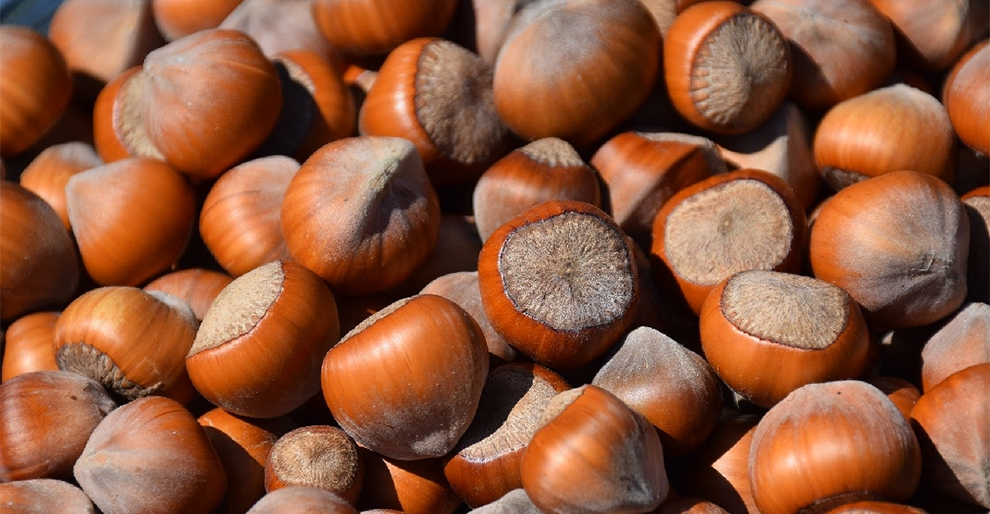 Originating in Spain, Barcelona Hazelnut is one of the primary hazelnuts that grow in the Pacific Northwest. Since people are leaning towards the other varieties, the percentage of Barcelona harvesting has shrunk significantly.

This variety is harvested in late September and has erect behavior and vigorous growth. It is grafted at apt rootstocks to grow as a tree.

Barcelona has decent production and yields a mid-sized, round-flat, brown-colored fruit. The husk envelopes the nut. Its outer nut has a moderate thickness, which is hard to detach from the nut.

This plant has a high nut-fiber content and is resistant to bud mites. Its nut-to-kernel ratio is 39.43 percent, and it has a tasty kernel. It finds use in the fresh nut market. 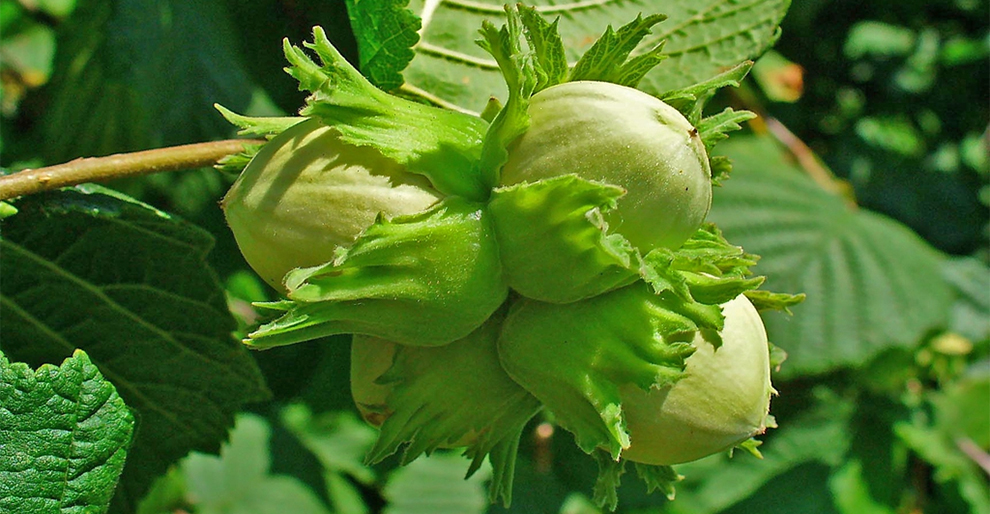 Also known as Common Hazelnut or European Filbert, the European hazel is a suckering, tall shrub with an umbrella-like, spreading canopy. It is identified by its rounded serrated leaves, showy-yellow flowers, and edible brown nuts, which grow in green papery parcels.

Typically, these hazel shrubs grow about 12 to 20 feet high with a 15 feet width. These hazelnut tree types thrive in full sun to part shade conditions and enjoy well-drained, moist soil.

This multi-stem flowering shrub grows best in USDA hardiness zones four through eight, and you can plant the European hazelnut shrub in borders and grow them as a hedge or screen. Some people like to prune the suckers to yield a specimen.

Its flowers appear like long pendant clusters of yellow catkins, which show in late winter. The dangling flowers are about 2-4.5 inches long. You will see them blooming in groups of three or two. Their yellow flower can blossom up a barren winter landscape and prepare it for spring.

These hazelnut tree varieties have an upright growing habit. Typically, the plant is yielded commercially because of the top-grade brown nut that it produces. Its spherical light-brown nuts appear in clusters of one to five and have a 0.8-inch diameter.

Their leaves have an ovate to round shape with double serrated edges. Its medium green leaves are about 10 cm wide and long. Before the plant drops its leaves, the foliage turns bright yellow. 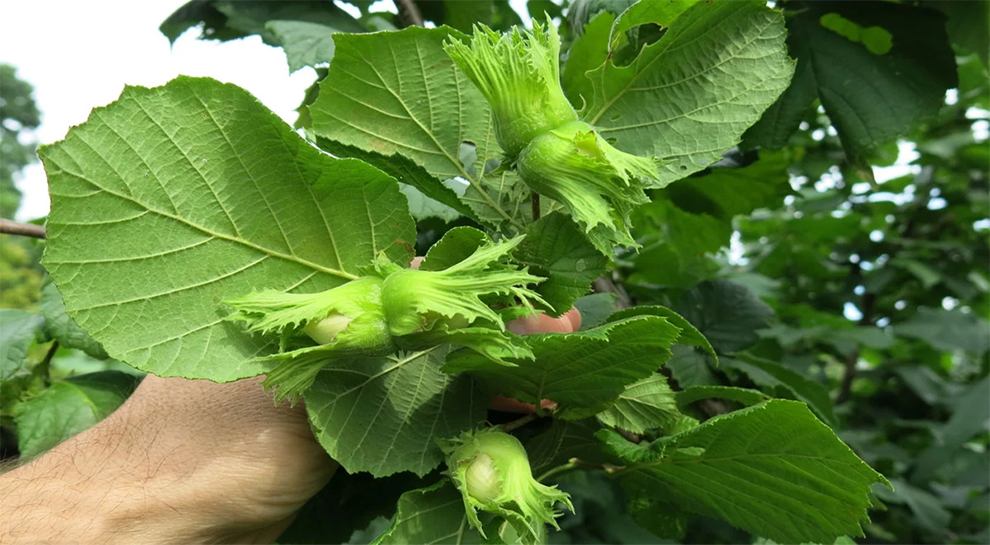 It is a multi-stemmed shrub with an open, rounded top and a wide-spreading base. Because of its size, it can adapt well to non-formal or naturalizing areas. These hazelnut tree species bear abundant annual crops with sweet-tasting, small nuts.

The plant starts yielding fruits two to three years after planting. Its nuts are easy to open and drop. When mature, it is free of the husk.

The large American hazelnut bushes grow as a clumping plant with outward-growing branches that develop a beautiful rounded crown.

Also referred to as the American filbert, the American hazelnut tree grows between 10 to 16 feet with an 8-13 feet width.

It is a cold hardy plant that thrives in USDA hardiness zones four through nine. Its nuts are edible and are ready for harvest from late July till October. The plant’s egg-shaped nuts grow in ragged-looking, leafy papery husks. The American hazelnuts taste similar to the European hazelnuts.

These types of hazelnut trees have identifiable dark green leaves and serrated edges with a pointy apex, and their leaves also have prominent veins.

You can grow this plant as a summer hedge. During fall, the plant’s leaves change to orange, yellow, burgundy, and rose. This plant thrives in full sun to partial shade in a region with moist, well-drained soil.

It loves the loamy soil but can grow in clay soil too. You can grow it in the shade, but it will reduce nut production. 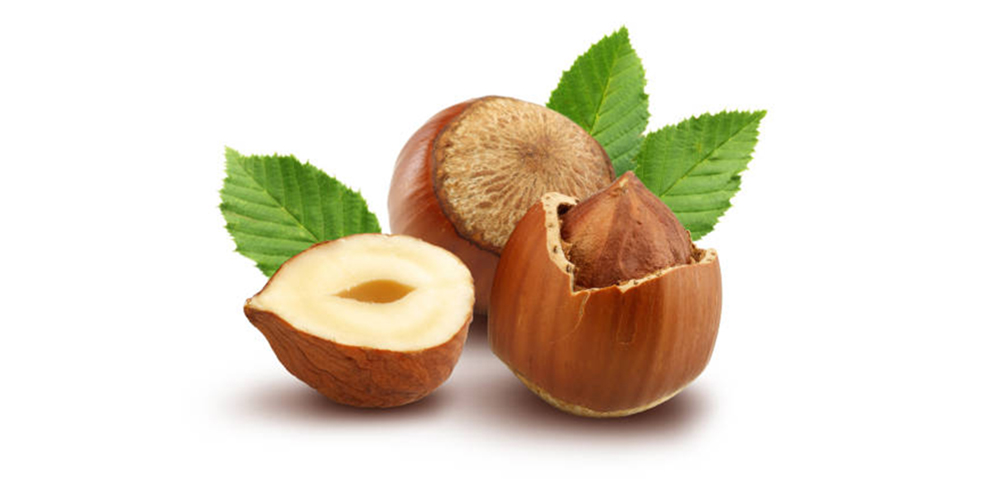 These are deciduous filbert tree varieties that yield a bundle of edible nuts. They have pale yellow catkins and round leaves with lobbed or serrated edges. It grows up to seven meters and has thicker stems.

Native to Asia, Asian hazelnuts are grown commercially for their delectable hazelnuts. You can easily distinguish them with their truncated apex on the opposite end of the leaf base and the serrated rounded leaves, giving an illusion that the leaf end is cut. 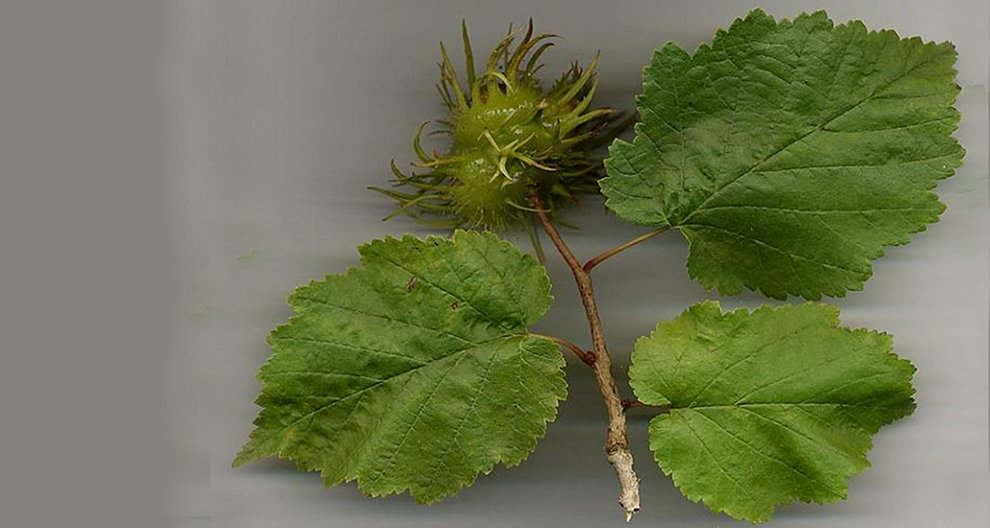 The tree has a corky bark with a gray-mottled texture. The bark exfoliates to reveal the orange under the patch. It is a majestic, tall nut tree that grows up between 40-80 feet with an attractive, conical shape.

These trees have beautiful flowers that appear in drooping clusters of pale-yellow catkins. Their flowers are between 2-3 inches long. Compared to the other species, these hazelnuts bloom later in early spring and not late winter.

The plant’s leaves are simple with an ovate or obovate shape with toothed margins. Its glossy green leaves are 10-20 cm and about 10 cm wide. Its leaves change color in the fall and acquire a dull yellow color.

The plant is hardy from USDA hardiness zones four through seven and grows across America, beyond Southern Texas, Florida, and California. Its hardy tree can survive drought, hot summers, cold winters, and different soil types.

Its fruit is about 1.2 cm and sits packed in the bristly soft or spiny husk except for the nut’s tip. 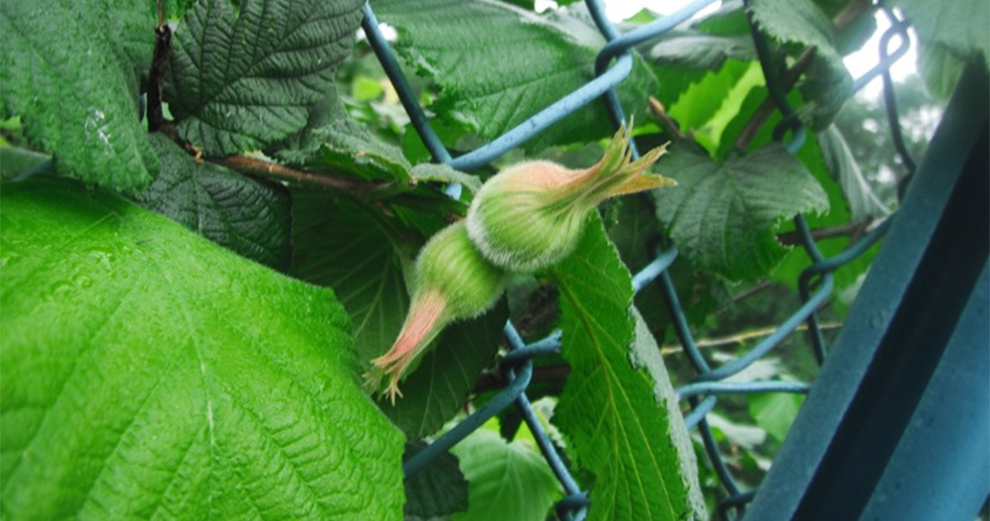 A deciduous shrub native to North America, it is one of the best types of hazelnut trees known for its thick-shelled nuts. The plant usually grows up to a height of about four to eight meters.

Its stem is identifiable with its gray-colored, smooth bark. It has almost oval or round leaves with a double-toothed leaf margin. Its underside is hairy, and its leaves are approximately 5-11 cm long with a 3 to 8 cm width.

Also known as beaked filbert, its drooping finger-like yellow catkins or the flowers show in the winter through fall, and its edible nuts remain enclosed in a husk, which resembles a beak.

Its beaked-shaped nuts are indeed one of its most distinguishing factors. Further, you can also identify the plant by its densely-growing thick foliage and rounded crown.

Its brown edible nuts sit in the hairy green husk that develops as a long tubular beak. You can harvest the nuts in early fall or late summer. 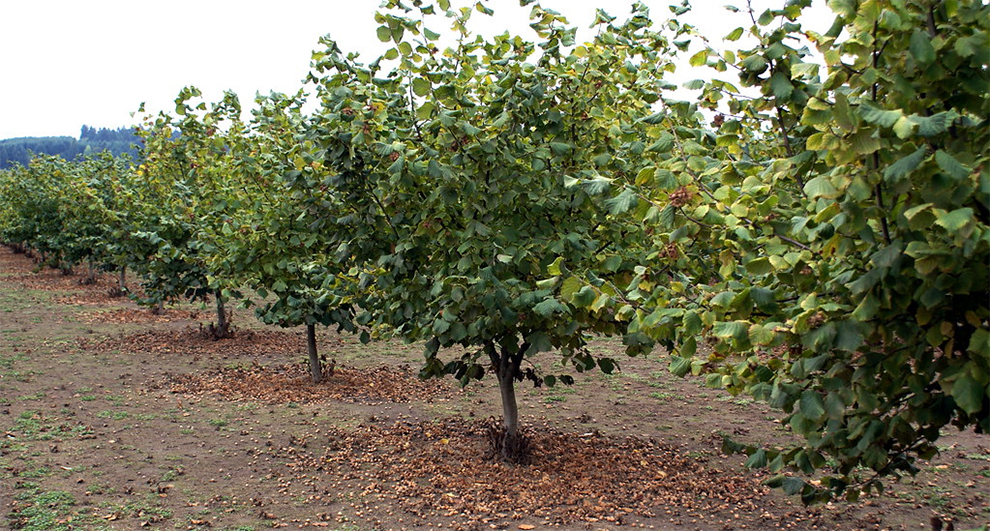 These hazelnut trees are known for their oblong nut shape and large grade. It is a favorite of many hazelnut lovers but is susceptible to blight. They have a harvest like Barcelona.

Are There Any New Hazelnut Varieties?

Other than the OG hazelnut varieties, there are also a few newer species. These include: 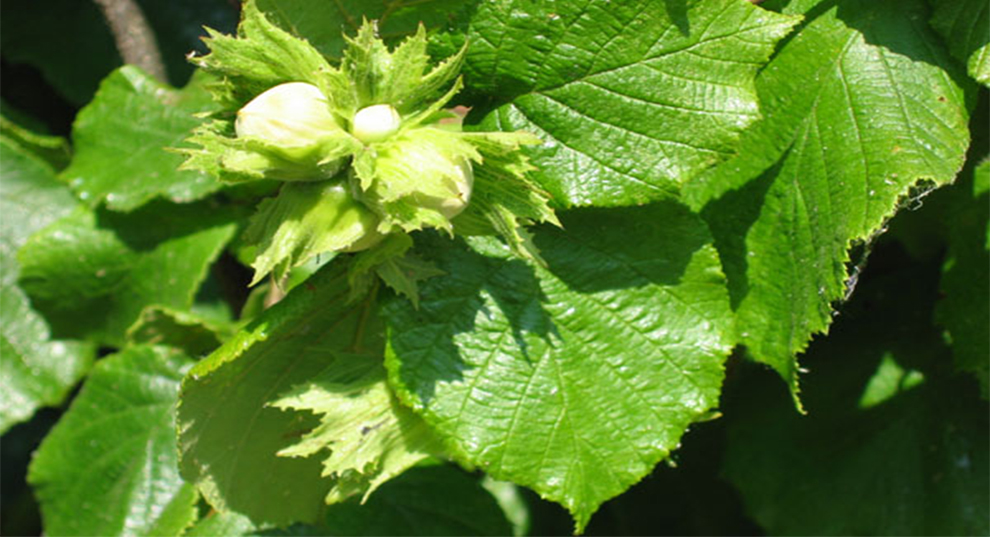 Jefferson is one of the newer species released in 2009 by the Oregon Agricultural Experiment Station and is an excellent producer and an upright, tidy grower.

It is a later variety than the other different types of hazelnut trees. Hence, it leafs out in April and not March like the usual species. After it establishes, it requires less pruning to maintain its shape than others.

These trees are approximately thirty to forty percent smaller than Barcelona and do not lean. Though Jefferson is hardy and resistant to the eastern filbert blight caused by a fungus, they are still susceptible while young.

So consider treating the plant with an EFB spray while they are still young. They have a larger nut with good kernel quality, usually harvested in mid-October. These plants are ideal for Oregon’s Willamette Valley and other regions with a similar climate. 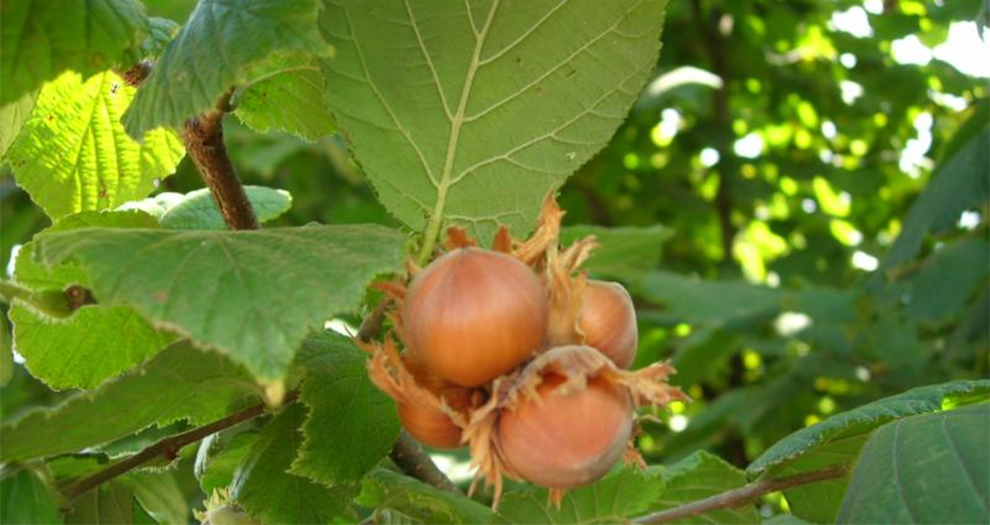 With blight, mite, and big-bud resistance, Yamhill has a smaller canopy and grows at a higher density of trees per acre. These trees produce a smaller nut and are harvested by late September.

Oregon State University released Yamhill in 2008. Sometimes Yamhill is called the upside-down tree because of its wide and short growing pattern. It is a less vigorous developing plant with flatter branch angles than Barcelona. Even though it is smaller than Barcelona, its nut production is higher. 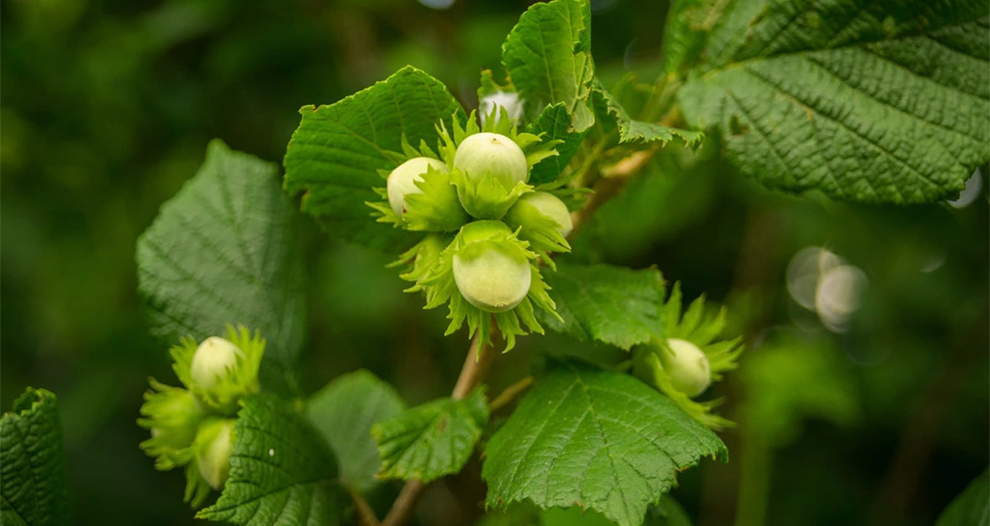 PollyO was recently released in 2018 and triggered a strange excitement amongst the hazelnut growers. These filbert tree varieties are one of the best alternatives to Yamhill and complement Wepster and McDonald, also bred at Oregon State University.

It is an excellent nut-producing kernel variety grown for its globe-shaped, vigorous nut production. Its nuts are usually small to medium but bigger than Yamhill.

Where Are The Best Hazelnuts Grown?

Most hazelnuts consumed in North America come from either Turkey or Oregon. They are the best varieties of hazelnuts.

Ques 1. Do you need two hazelnut trees to get nuts?

Ans. Hazelnuts do not self-pollinate. So, you will be unable to get fruit from a single plant. Hence, you will require two genetically different varieties of hazel trees because plants from the same varieties do not assure successful pollination.

Ques 2. How long does it take for a hazelnut tree to bear nuts?

Ans. Hazelnut tree varieties will take at least two to three years from planting to bear nuts. However, if you grow hazelnut from seeds, it will take approximately eight years to yield nuts.

Ques 3. Can you eat hazelnuts fresh off the tree?

Ans. You can eat the hazelnuts straight off the tree if you have something to break open their outer shell.

Ques 4. What time of year do you harvest hazelnuts?

Ans. Hazelnuts are ready for harvest between September and October, depending on the weather where it is grown.

Ques 5. Which are the best-tasting hazelnut varieties?

Ques 6. What is hazelnut allergy, and is it dangerous?

Ans. When you have a hazelnut allergy, you will start experiencing symptoms when you consume hazelnuts or fruits containing them. The symptoms can range from mild to severe, depending on the intensity of the allergy. A few of the prevalent reactions that this allergy may induce:

At times this allergy can be life-threatening as it is linked to anaphylaxis that impairs breathing and can send your body into a state of shock.