Which Are The Best Witch Hazel Varieties? 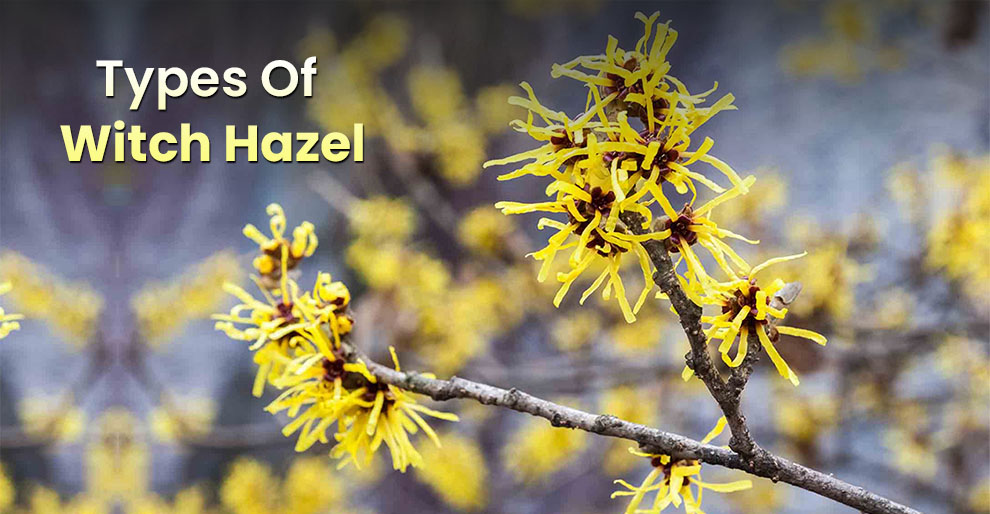 Native to the eastern coast of North America, Japan, and China, Witch Hazel is a small multi-stemmed, deciduous tree or a large shrub with some of the best fall attributes. It has fragrant, yellow flowers that bloom from October through November.

There are many types of witch hazel, and you may know them for their massive use in medicinal formulas and cosmetics, but the tree is also widely popular as winter landscaping.

Often people include it in their homes as an attractive, decorative outdoor plant, but native Americans employ its bark and leaves as a popular folk remedy. The plant yields spidery, fragrant, and bright flowers in the winter and fall.

It is a hardy plant and requires the cold temperature to yield bewitching blooms, making it a showstopper in any winter landscape. Even though its flowers are not as showy as most others, its exceptional fragrance makes it stand out. It has a myriad of uses and several medicinal purposes. Hence, it enjoys massive popularity.

Broadly, there are four witch hazel varieties with multiple hybrids. Of them, the most prevalent variety is the Hamamelis virginiana. But, outside North America, there are varieties native to Japan and one specie native to China. This guide will discuss the different categories you can find in witch hazel. 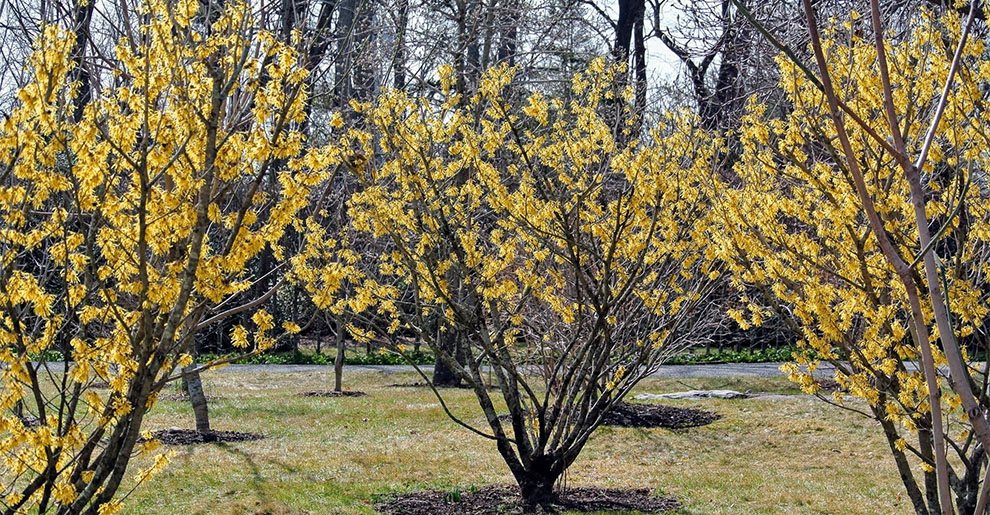 Botanically called the Hamamelis virginiana, Common Witch Hazel is a large deciduous shrub with an irregular, beautiful branching habit. Typically, it grows along the woodland edges, and its dark green, rounded, and large leaves hang onto the winter branches.

Native to Chicago, Illinois, and North America, these witch hazel cultivars produce yellow strap-like flowers that are the last blooms to show in fall, often concealed by the leaves. The plant needs six hours of sun, four to six hours of light shade, and four hours of full shade. It thrives in USDA hardiness zones three through eight, depending on where it is grown.

Another one of the most popular types of witch hazel, Japanese Witch Hazel are upright shrub with an open frame and a rounded, spreading habit, usually growing about 3.5 meters with an equivalent spread.

Botanically called the Hamamelis japonica, the Japanese Witch Hazel plant blooms in winter. It produces pale yellow flowers with twisted petals. The flowers of these witch hazel varieties appear in clusters on the bare branches, usually from mid to late winter.

Its mid-green, oval leaves show in the spring and change their color to yellow before leaving the plants in autumn. The tree thrives in moist, acidic, well-drained soil with full sun. 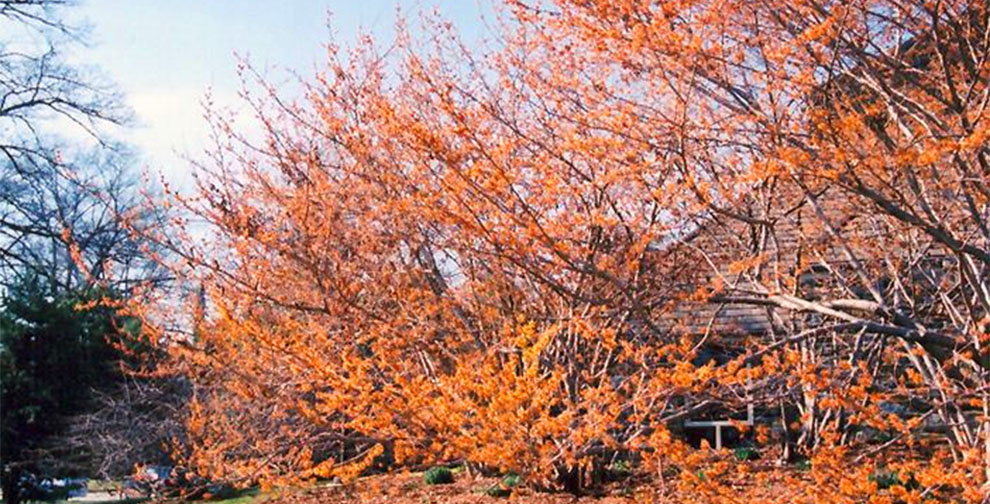 Botanically called the kohankie red, Vernal Witch Hazel is one of the top-loved hamamelis species. They have orange and yellowish-red flowers with a spicy aroma. Its flowers show between early spring and late winter before the unfurling of the leaves. The flowers live for three to four weeks, followed by new foliage with attractive bronzy-red colors, changing to dark green as the tree matures.

These trees change their color to buttery yellow and golden yellow in fall. Its dried leaves often last until winter, and the fruit capsules mature from September to October.

Later they open to yield black seeds, which attract the birds. The plants sucker to form colonies. These witch hazel species are ideal landscape specimens.

Botanically known as the Hamamelis × intermedia ‘Diane’, they are a cross hybrid between Japanese Witch Hazel and Chinese Witch Hazel. These plants thrive in medium or average moisture conditions with full sun to partial shade and well-drained soil.

Such witch hazel cultivars prefer organically rich, acidic, or moist soil, and consistent moisture is mandatory for the plant to thrive.

These shrubs have excellent tolerance to clay soil, provided planted in well-draining soil. They tend to have a colonial spread. So, to avoid this, you must remove the root suckers as and when they develop. You can prune these witch hazel varieties in spring after they yield flowers to manage their size and shape.

The plant grows between 12 to 20 feet tall and is particularly distinguished for its fragrant, spidery flowers that show from mid to late winter before the spring foliage appears.

It is one of the more popular witch hazel cultivars that comes from a cross-hybrid between Chinese Witch Hazel and Japanese Witch Hazel. Botanically called the Hamamelis × intermedia Arnold promise, these cultivators are becoming increasingly popular in the landscape today over the other native varieties of witch hazel.

It is easy to grow shrubs. However, there is one significant complication associated with it. Such hamamelis varieties are grafted onto the rootstock, and the plant yields unwanted suckers.

Further, this deciduous shrub is renowned for its yellow, spidery blooms that bloom between late winter and early spring before the foliage opens. Many botanists believe the Arnold Promise is one of the first flowering hamamelis species of spring.

Often, they may even blossom when the snow still envelopes the ground. It has a low branching system, 6-inch-long oval-shaped leaves, vase-shaped growth habit, and toothed edges. During fall, the foliage switches its colors to an attractive yellow-to-orange color.

Lastly, these witch hazel varieties have an average growth rate and take multiple years to become 15 feet tall. You can plant them in the fall, and they will do their best. But summer and spring plantations can also work, provided you water them deeply and frequently. 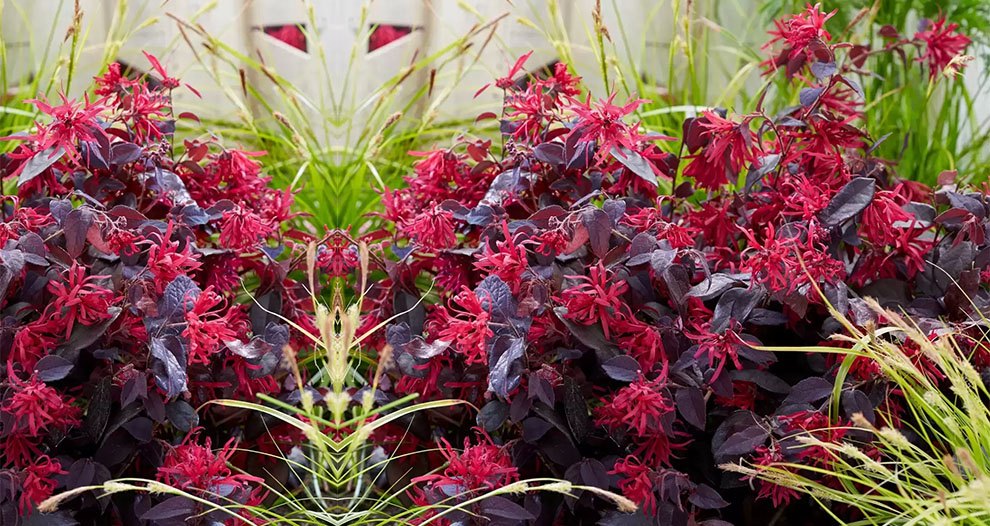 Botanically called the Hamamelis Mollis, these are not as hardy as the other types of witch hazel but are one of the more fragrant hazel. Typically, people grow it as a small deciduous tree or a large shrub. Though the plant does not demand heavy pruning, to maintain its visual appeal, it helps to prune the plant in spring once it blooms. It can help curtail the size and give shape to the plant.

These witch hazel varieties thrive in clay soil, provided it has good drainage. In addition, the plant demands consistent moisture, and its leaves may scorch and suffer in dry, hot summers. To restrain colonization, you must prune them as they have a vast root-sucking spread. 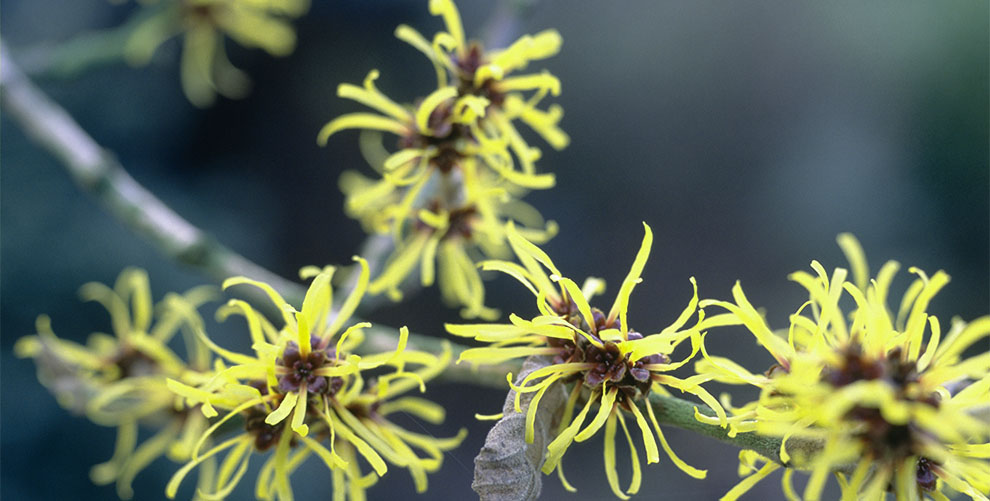 Another cross hybrid between the Chinese and Japanese witch hazel species, these grow well in medium to average moisture, full sun to part shade, and well-drained soils. The plant blooms in full sun and lives in organically rich, moist, and acidic soil. If the drainage is good, the shrubs can tolerate the clay soil.

However, these types of witch hazel form rapidly with their colonial spread. Hence, remove root suckers as soon as they appear right below the graft union.

Pruning is preferable only in spring, but typically this plant grows between 9 and 12 feet tall with an equivalent spread. The plant produces yellow flowers and has an upright-spreading, branching system.

Please remember these hamamelis species are susceptible to gall aphids, weevils, scale, leafroller, and leafminer pests. In addition, they are also vulnerable to diseases like leaf rots, spots, and powdery mildew. Often Japanese beetles and caterpillars may also chew on their leaves. So, please take note of all this before planting it. 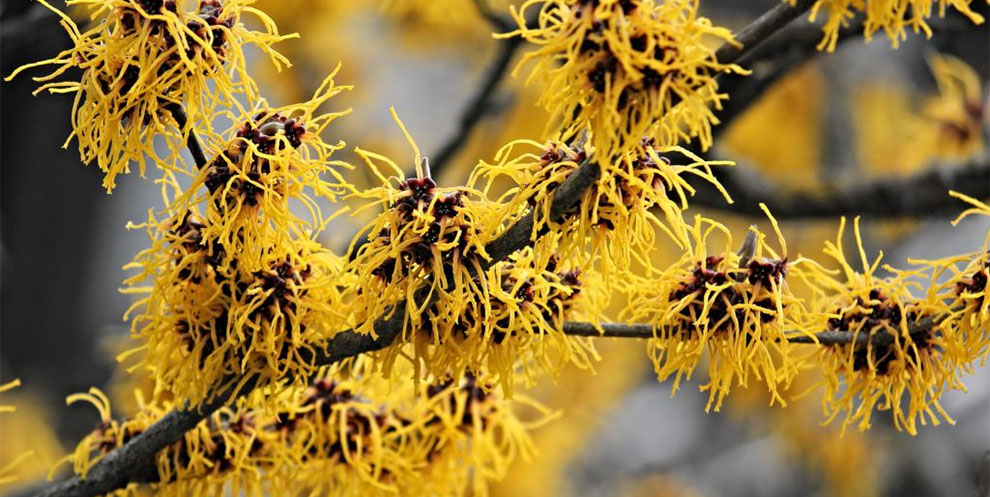 There are different types of witch hazel, but many are bred from the cross between Chinese Witch Hazel and Japanese Witch Hazel. These are known as hybrids. They have large shrubs with ribbon-like flowers. The plant produces shades of yellow to red flowers and adorns the trees in late winter or early spring before the emergence of new leaves.

These hamamelis varieties have a moderate growth rate and grow between 10 and 15 feet as a compact tree and a little over eight feet as a large shrub. Regardless, the plant demands full sun to partial shade for growing. It thrives in USDA hardiness zones five through nine and enjoys moist, well-drained, acidic soil. 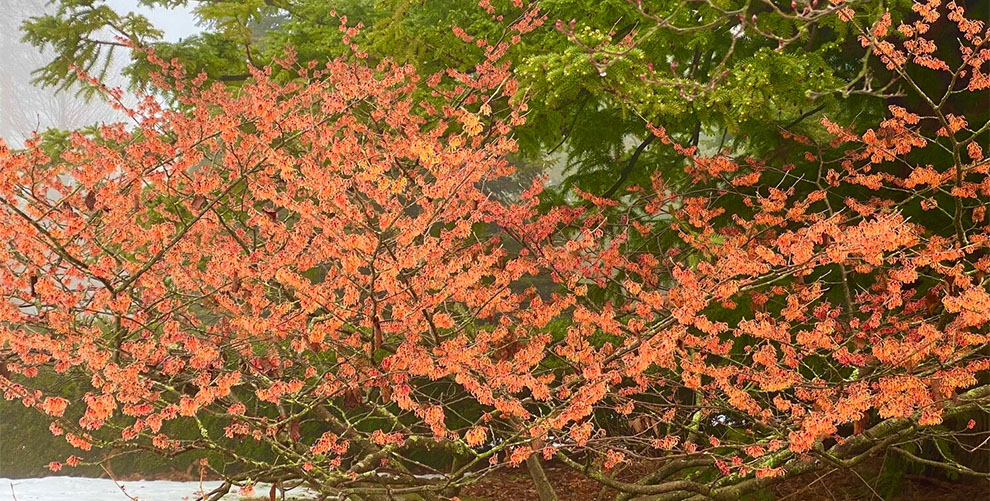 Fondly called the Copper Beauty, the Jelena Witch Hazel is another one of the most popular Hybrid cultivators with ascending branches and a spreading habitat. These hamamelis varieties yield axillary clusters of copper-hued, sweetly scented, crinkly, four-petaled flower clusters.

The tree has green, broad, oval leaves. But, it gets adorned with reddish-orange foliage during the fall months. For the plant to bloom and blossom well and grow to its full height, you must plant these witch hazel species in well-drained, fertile soil and full sun.

Loved for its spectacular winter blooms, Harry Witch Hazel is a compact, deciduous shrub. It produces pale orangish-yellow flowers between spring and winter that are mildly fragrant. Every flower in these plants comprises four strap-shaped, ribbon-like crankled petals that have a purple calyx.

These upright witch hazel varieties grow up to 2.5 meters and can be just as wide. The plant produces showy, yellow flowers, which are mildly fragrant. It blooms between early spring and winter but does not have a distinctive fall coloration.

The plant grows in full sun to part shade, and demands a well-draining soil for thriving, provided it is acidic, organically rich, and moist. 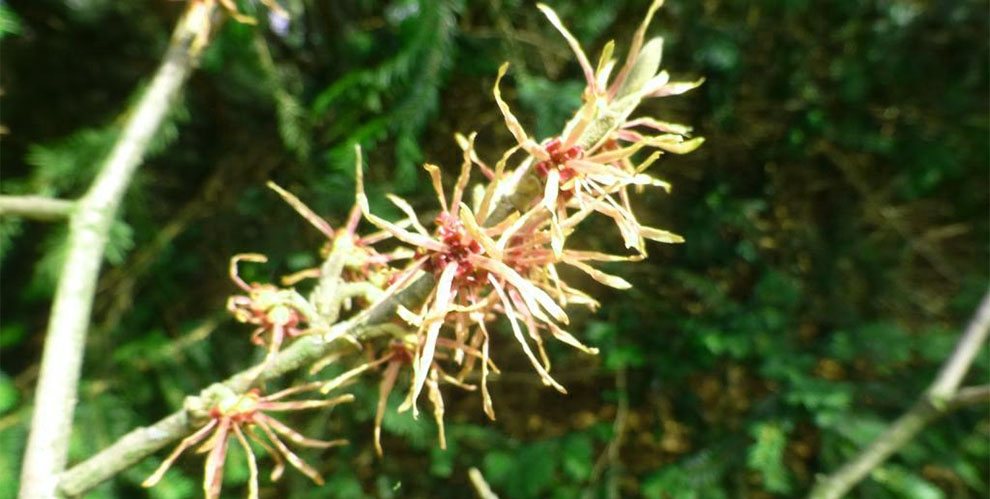 Livia is one of the hamamelis varieties with a spreading habit, which grows 2.5 meters high with a 3-meter spread. This rounded, compact, deciduous shrub has broad elliptic leaves and twiggy branches. Its leaves grow 11 cm long with a 6.5 cm width. Typically, its leaves have a green to yellowish tint with a flush of maroonish-purple in spring. The leaves change their color to dark green with an orange-red mix in autumn.

These witch hazel cultivars have lightly scented deep ruby-red petals and showy blossoms with purple-red calycles. It has a long flowering period and stays on the tree from autumn to late winter. Unlike many other cultivators, these do not show a change in color during the fall.

These are mid-sized witch hazel varieties with rounded shrubs, curled, four-petaled, crinkled blossoms, and a purple-red calyx. The plant has obovate, dark green leaves, which change to orange-yellow in the fall. The plant performs best in full sun, well-drained, acidic, fertilized, and moist soil.

Ques 1. Which witch hazel has the best scent?

Ans. The Chinese Witch Hazel, or the Hamamelis Mollis, is the most aromatic among the different hamamelis species.

Ques 2. Which witch hazel is medicinal?

Ans. Witch Hazel has medicinal uses, and many species are used in various home remedies. However, Hamamelis virginiana, or Common Witch Hazel, is the most prevalently used in folk medicine in America. Native to North America, Common Witch Hazel’s leaves and barks go into making ointments and teas.

Ques 3. Is there a dwarf variety of witch hazel?

Ans. Little Suzie is one of the dwarf varieties chosen mainly for its smaller size. It grows between four and five feet tall and wide.

So, these are the different types of witch hazel. It is an inclusive list, and the hybrids and cultivators in this category are endless. Hence, there is witch hazel for every yard, garden, or landscape.