How To Get Rid of Fungus Gnats in Houseplants  – Prevent & Kill

These pesky little creatures like moist environment, so keep the soil dry to prevent them from multiplying. If they have already grown, use hydrogen peroxide, neem oil, sticky traps, and other methods to get rid of them. 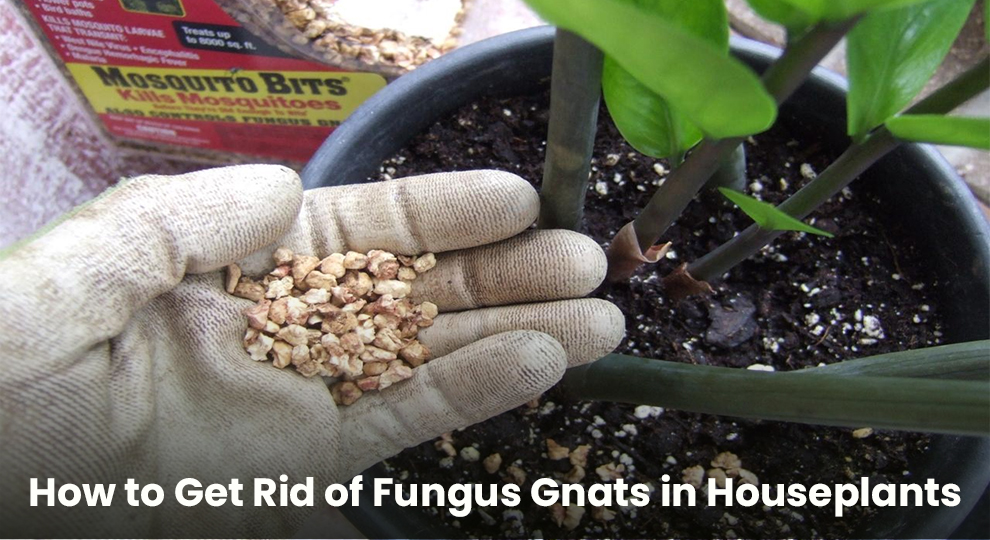 Also known as soil gnats, the fungus gnats are one of the most prevalent and annoying houseplant pests. You will spot them as tiny black flies that buzz around the indoor plants. While adult gnats are harmless, their larvae might inflict some damage.

Typically, the larvae feed on fungi and algae. However, they may also compete with the plant roots inside the soil for resources. It might lead to the plant’s stunted growth or cause root damage.

In all honesty, eliminating them can be somewhat challenging, and the worst part is they can infest any plant growing in the soil. So, if you have multiple indoor plants, they may affect them all.

They are annoying bugs, but you can get rid of them. The simplest way to keep the gnats’ infestation at bay is to leave a gap between the two watering for the soil to dry.

Alternatively, to keep gnats at bay in the indoor potted plants, you can also employ some prevalent home remedies like vinegar, hydrogen peroxide, and cinnamon, as they are safe and won’t kill your plant.

Keep scrolling as we discuss some ways to kill this troublesome fungus.

How To Treat Fungus Gnats In Houseplants Naturally? 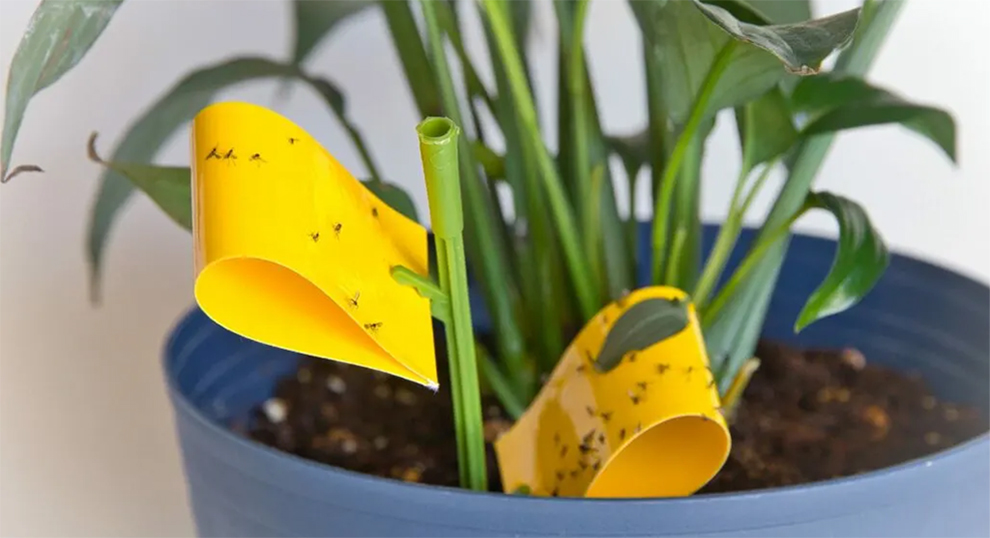 If gnat fungus has infected your plant, you must immediately take measures to quarantine the infected plant from your other houseplants. It ensures that the problem does not aggravate or spread to other plants.

Because the fungus gnats live and breed in the soil and the maximum damage also happens there, you must treat the soil to target them. Below, we will address some popular ways:

A. Control the soil moisture

Gnat fungus thrives best in moist soil. They cannot live in dry soil. Hence, the most effective and easiest way to get rid of them is to ensure that you do not overwater the plant. At the same time, you must not let the soil dry out completely on your indoor plants.

Thus, we recommend employing a soil moisture gauge. It can help examine the ideal moisture level for the houseplants to keep gnats at bay.

Alternatively, you can use indoor self-watering planters to prevent overwatering issues and keep gnats in check.

B. Bottom water the plants 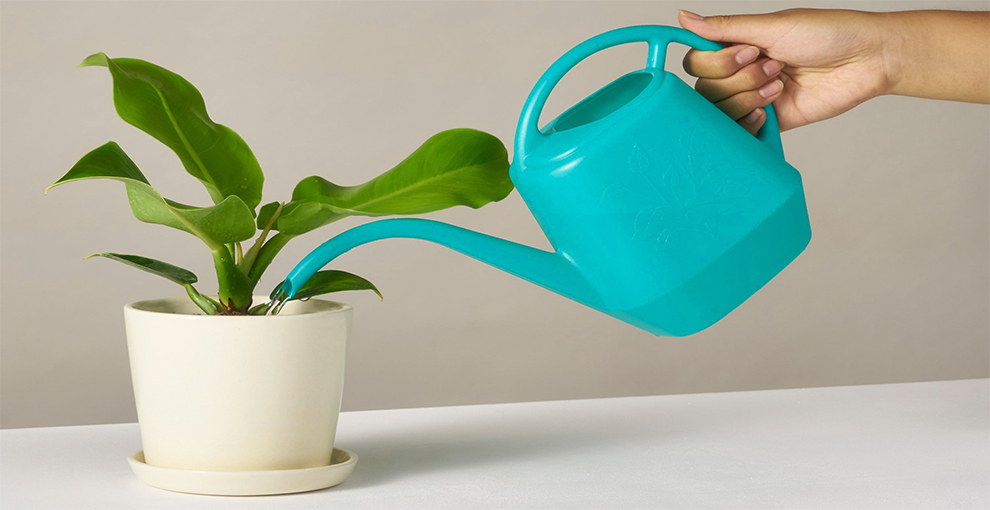 It is one of the most effective ways to keep fungus gnats at bay. Not all plants like to dry out between two watering routines. A few of them enjoy moist soil.

In this case, bottom watering is ideal. It is when you set a planter with a drainage hole into the water and let the plant draw water via the hole. It helps keep fungus gnats at bay because your top layer will never be wet.

It is a cheap, effective, and quick way to kill all larvae on contact. You can take four parts of water and mix it with one part of hydrogen peroxide and pour this mixture onto the soil. This solution can do wonders as it primarily kills the eggs, pupae, adult flies, and larvae.

Before applying hydrogen peroxide, let the soil dry for a bit. Following this, you can spray it on the soil surface well till it saturates the top few inches.

Alternatively, if you need a more effective treatment, you must water the entire plant using the hydrogen peroxide mixture and soak all of the soil. It will foam and fizz, which is normal. Since it breaks into oxygen and water molecules, it is not dangerous for your plants.

D. Use a neem oil spray

One of the best natural insecticides to tackle fungus gnats is neem oil. You can easily find neem oil spray in any shop that sells plants. You can find it in a pre-diluted spray bottle or in a concentrated form that you will have to dilute as per requirements.

Regardless, you need to spray the diluted neem oil onto the infestation to eliminate the larvae. For best results, you must soak at least five to ten cm of plant soil with neem oil spray once a week for two months or an extra month from when you stop seeing the flying adult gnats.

You can find several biological control agents that help get rid of the gnat fungus larvae from the soil. One of the best methods is using mosquito bits.

Typically, Bacillus thuringiensis israelensis or small corn cob granules coated with a biological insecticide are mixed with potting soil or sprinkled on the soil surface before planting to combat fly larvae and other fungus gnats.

Alternatively, you can soak them in water and apply the treated water to the soil. Since their residue effect is not long, you must repeat the application if dealing with stubborn infestations.

Alternatively, you can also attack gnat larvae with beneficial nematodes. They live longer in the soil. So, hunt for a product that contains Steinernema feltiae. It is a naturally occurring insect-parasitic nematode, which proactively looks for the gnat larvae fungus and releases bacterium to kill them.

If you have tried everything and nothing did any good to your plant, you can invest in a store-bought solution to keep fungus gnats at bay. If you are unsure how to make a DIY trap, you can shop for ready-to-use Garsum traps. These are pesticide-free, non-toxic traps.

You can place them around the pot, and you will see the adult gnats getting attracted to their bright yellow color. They will get stuck in the traps. After the trap is full, you can throw it away and buy a new one.

Take about 1.3 cm of apple cider vinegar in a clean plastic cup. Add two drops of dish soap into it for the two ingredients to combine well. Add transparent tape onto the cup for it to be covered completely.

Take a thick needle and make a small hole in the tape to give gnats space to fly into the cup. Once inside, they will get stuck to the tape. It is the mixture’s smell that attracts the gnats. They get stuck on the tape and die after a few hours.

But, if you have massive gnats in the soil, you must dump out and replace the trap daily.

You must try aerating the soil in the potting plants. It can promote air flow and helps with moisture issues in the initial few inches of the soil. In addition, it also ensures that the soil does not cake together excessively or shrink from the pots’ sides.

You can use chopsticks or your fingers for the same. You do not have to specifically do it when you overwater the plant, but rather do it routinely to maintain plant and soil health and keep gnats at bay. Please be cautious and do not disturb the roots.

I. Use gravel or sound 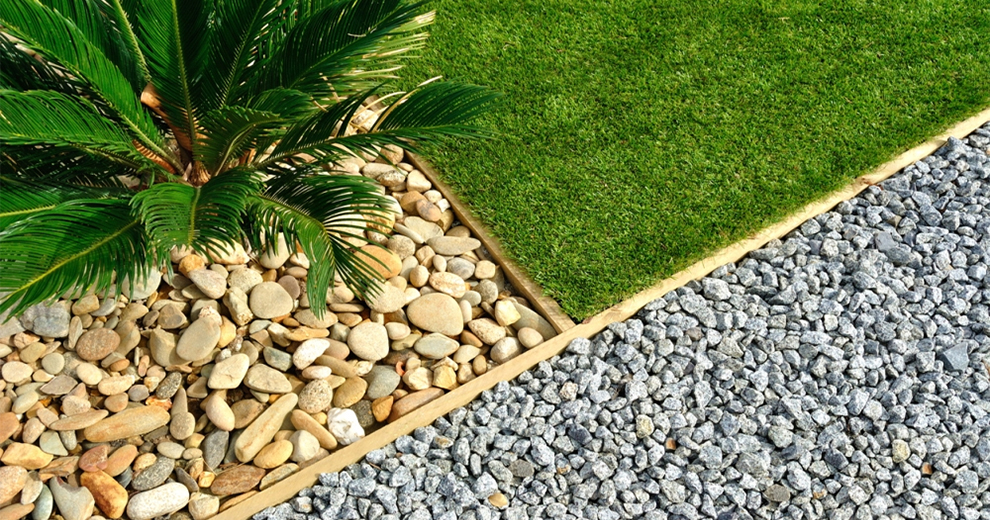 Typically, the fungus gnats lay eggs on the soil’s top inch. So, to avoid this, you can replace it with gravel or sand. It makes the platform dry, and the resulting area will not be conducive for the nutrient-rich fungus to hog onto. Without the available food source, they will be unable to reproduce.

How to kill fungus gnats in houseplants if nothing works? If the outbreak continues despite all the above measures, you can consider repotting your plants with a fresh potting mix. Please note depending on the quality and size, keep it as a last resort because it can be tedious.

Adult fungus gnats are grayish-black, delicate, and mosquito-like flies. They have one pair of clear wings and long legs, emerge from potted plants and are not strong fliers.

Overwatering is one of the primary causes of fungus gnats. Hence, they are prevalent in rich, damp soil and feed on organic material, fungi, and root hairs. They live for a week and lay around three hundred eggs in moist, rich soil. It takes only six days for the tiny larvae to show and start feeding on the plant roots during the two-week period.

Following this, the pupal stage lasts three to four days before the young adults leave the soil and commence the next generation. Their life cycle takes as little as three to four weeks, depending on the weather conditions.

Because of their relatively short gestation and proclivity, the houseplants host each stage – adult, pupae, larvae, and eggs, in multiple generations simultaneously.

In case of severe infestation, a plant may lose its consideration portion. Some plants susceptible to fungus gnats are:

What Damage Do These Fungus Gnats Do To The Plants?

The adult fungus gnats neither feed nor bite. But, they can be irksome if you do not try to control them and let them reproduce in large numbers.

The gnats’ larvae can pose a threat to the young plants. Moreover, the larvae thrive on the organic matter in the soil and on the roots of the houseplants. Less-established houseplants and seedlings are at the maximum risk because of their delicate roots.

Ans. Cinnamon is a natural irritant and a fungicide. It prevents gnats from laying eggs. But not all cinnamon can help get rid of gnats. Thus, consider using Ceylon cinnamon, not the regular one you may have at home.

Ans. Fungus gnats thrive in moist environments with decaying, organic material. So, when you add coffee grounds, you attract the fungus. Moreover, they cannot taste its bitterness. Thus, it won’t work to keep them at bay but lure them further.

Ques 3. How to get rid of fungus gnats in houseplants the fastest way?

Ans. Using hydrogen peroxide is one of the best methods to kill fungus gnats in indoor plants and probably one of the fastest.