Japanese Maples In Winter & The Care It Needs 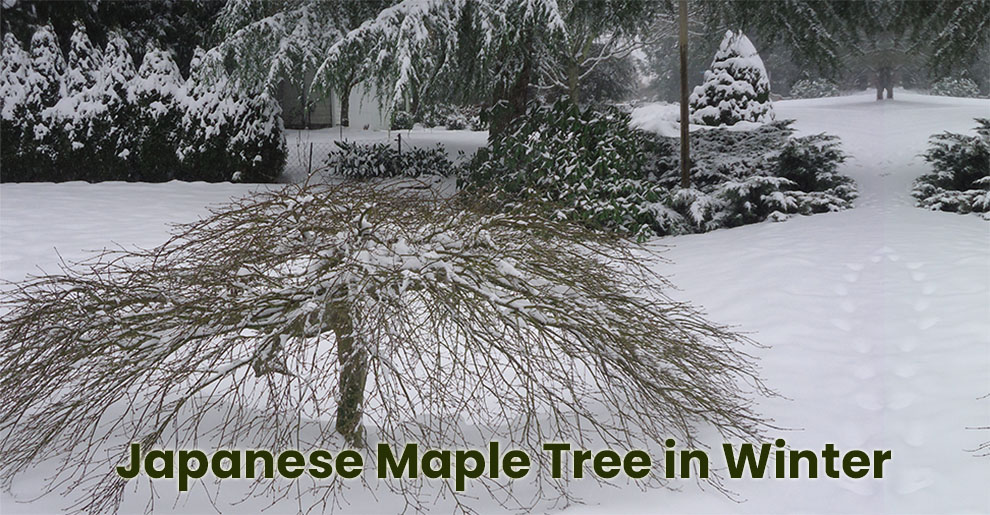 Winter is not always kind to the shrubs and trees, and if you reside in colder regions, you will experience some winter damage on your otherwise beautiful Japanese Maple. But don’t be sad. They can pull through just fine if you know how to protect Japanese Maple in winter.

Japanese Maples are deciduous plants, and the word deciduous translates to fall off. It implies that Japanese Maples will lose their leaves every winter. Between October and November, its leaves change color and finally drop to the ground between late November and December. The new buds will show, and fresh leaves will appear in February-March.

In winter, when the sun is warm, the maple tree cells thaw in the daytime and refreeze again at night. When they refreeze, they burst and tend to die. The winter dieback in Japanese Maple may happen because of frozen soil, drying winds, or scalding sun. One of the more apparent signs of damage on the Japanese Maple tree in winter is broken branches.

Typically, Japanese Maple varieties lose their leaves in winter because the weather outside is dry and harsh. Often heavy snow also acts as a culprit in Japanese Maples suffering from broken branches. But, there may be multiple factors responsible for winter damage.

Thus, the plant does not need to spend all its energy protecting its leaves. Rather they conserve the resources to fare through the winter months. Read below as we discuss how to protect Japanese Maple in winter.

How to Care for Japanese Maples in Winter?

When winter comes, the tree starts losing its leaves, goes into dormancy, and preps for the winter. The Japanese Maple can handle temperatures down to -15° F sans any trouble. However, while young, the Japanese Maple appreciates some protection.

When taking measures to guard your trees against winter, you must take into two of the most vital factors – harsh effects from ice and wind. So, here are some tips for Japanese Maple winter care. Let us address them one by one:

A. Pick your location wisely 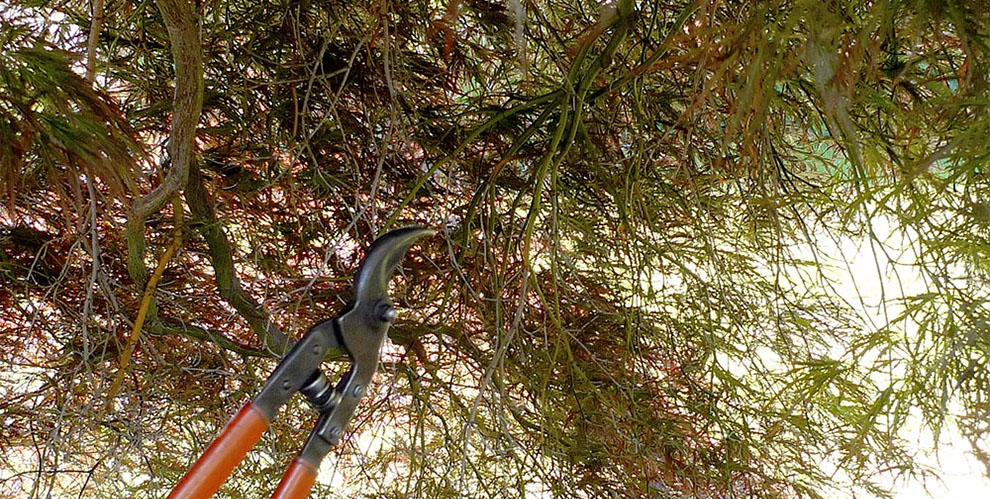 Your plant’s winter protection starts from the moment you plant it. The plant’s location has a detrimental impact on its ability to thrive in freezing temperatures. Hence, you must pick a spot close to your home to guard the plant against the harsh winter winds.

In addition, you must ensure that the tree is planted in a place with southern exposure to offer it ample sunlight. It helps keep the tree warm. Japanese Maple loves the full sun and requires abundant light to portray its beautiful colors. So, to protect the Japanese Maple tree in winter, you must place it in a south-facing spot before winter arrives.

If you have a small Japanese Maple, you must create a shelter around it with landscaping elements for added protection from ice, snow, and wind. Planting near the building also goes a long way in stabilizing the temperatures.

On the contrary, if you are growing Japanese Maple in a container, Japanese Maple winter care is straightforward. You can move it to a sheltered spot or a garage whenever there is an ice or snow forecast or if the temperature drops below the freezing level.

B. Be careful with the fertilizer

You should know how to properly feed your maples with fertilizers. You must never fertilize the Japanese Maple in the late summer or fall because the impending new growth does not have ample for hardening before cold weather sets in. It is when the branches are vulnerable to winter damage. Hence, the ideal time to apply the fertilizer is when some healthy portion of the growing season remains, that is, early summer and spring.

C. Water heavily before the freeze-up

Japanese Maple loves the water. Hence, consistently water it during the fall season. Ideally, watering it once every week suffices for good care for Japanese Maples during winter months. When the ground freezes, trees do not have enough water to reach them. It may result in winter damage.

At this time, young trees are susceptible to maximum damage. However, Japanese Maple fares well with a good fall watering regimen, no matter how old they may be.

Thus, beyond the regular weekly watering, you must perform a deep soak towards the end of the fall for Japanese Maple cold weather protection. It also ensures that the Maple receives enough moisture across the root system before the temperature drops below freezing.

In cold weather, the plant’s watering requirement is less. So, if you go by their regular watering schedule, you may overwater the plant, causing root rotting during winter.

Moreover, plants enter dormancy in winter. Hence, it is pivotal to limit the watering schedule during this time. Water strictly when the soil’s top inch appears dry on touch. Thus, meeting your plants’ watering needs during the autumn can go a long way in caring for Japanese Maple trees in winter.

Insulate the roots with about a three-four inch-deep layer of mulch pile built around the tree’s base. However, do not place the mulch up close to the trunk. It should be at least six inches from the trunk.

Extend it, spreading it two to three feet beyond the drip line, and build a mulch ring with compost, wood chips dead, leaves, and bark to ensure minimum freeze damage. Mulch helps retain moisture and insulates the root zone.

When you experience winter winds or heavy snow, you must wrap your plant with burlap for at least the initial three years season after season. Snow falling in colder climates can guard both endangered and protected plants. The snow cover insulates the soil like mulch, but the snow accumulating on the Japanese Maple tends to weigh them down, resulting in breakage.

Thus, take measures to properly wrap the tree by preparing the smaller twigs and branches before they freeze and are susceptible to breakage.

To guard the plant, tie one end of the rope around the tree’s base, and encircle the tree’s crown with the string from the bottom up, reaching as high as possible. After you cover your maples with burlap from top to bottom, you need to tighten the rope, push the branches close together, and fasten the cover with heavy-duty duct tape or rope.

Typically, gardeners prune the Japanese Maples in winter, but excessive pruning can severely damage the tree when the temperature is low. Moreover, trimming the branches can result in sap loss, weakening the plant and exposing it to several diseases. Thus, lightly pruning Japanese maples in winter or waiting until summer or spring to trim larger sections of branches and stems can help.

What To Do With Potted Japanese Maple In Winter?

By adding some extra heat and insulating the pot in cold climates, your potted plant can survive the winter and get prepared for an outdoor placement during spring.

Measure the potted Japanese Maple’s girth as part of the Japanese Maple winter care. If you do not have a cloth sewing tape measure, you can wrap a string around the pot and cut it to the same circumference. Now, measure the string’s length.

Now, cut a bubble wrap at least two times the pot’s circumference. The wrap must be two times as tall as the Japanese Maple pot. Tape one end of the bubble wrap to the container with a gaffer’s tape or duct. Packing tape can also help, but the adhesive tends to rip off during winter.

So, if you employ packing tape, add some extra tape for proper adhesion.

Wrap the bubble wrap twice around the pot, and secure the tape’s loose end. Watering can also be imperative in caring for Japanese Maple in winter. You must water the tree thoroughly to retain the heat across the winter. Keep the potted Japanese Maple in a shed or an unheated garage.

Even though the tree’s upper parts are cold tolerant, the roots may be damaged if exposed to temperatures below 14 degrees. Placing the plant in a shed or the garage can guard it against the cold winds, which tend to draw excess heat from the pot.

If the temperature in the shed or the garage goes below 14 degrees, use a heating pad under the container on a low setting to prevent the root temperature from dropping excessively.

When Is The Right Time To Prep Your Plant For Winter?

You must prep by covering Japanese Maple in winter around the fall time in October. Even if you are not planning to cover them, get a head start with your winter care by fall. 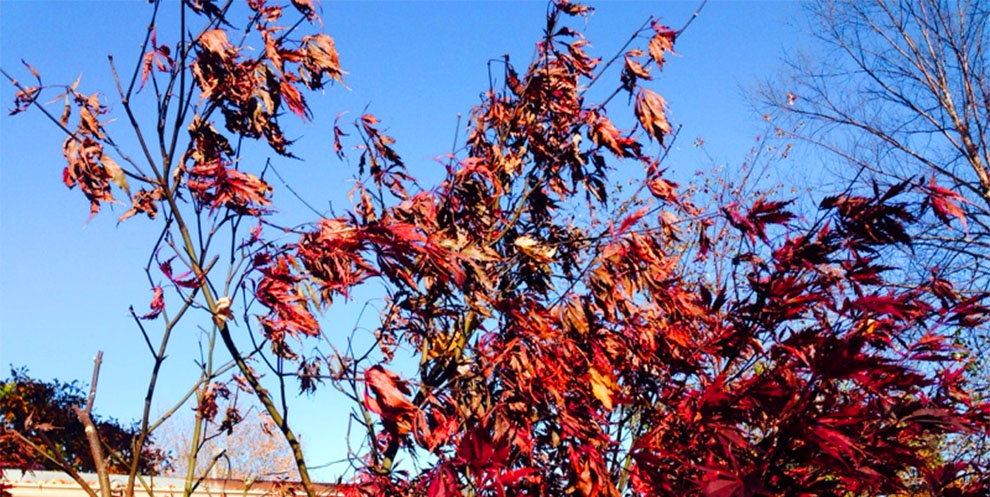 You can tell about Japanese Maple’s winter damage by the foliage’s browning, shriveling, or blackening. Over time, the leaves may drop from the tree, resulting in branch dieback. Significant branch dieback results in remaining branches and the trunk’s massive exposure to the sunlight, resulting in susceptibility to sunscald and causing injury to the barks.

It makes the bark areas susceptible to fungal infections and pest attacks. Moreover, a freeze-damaged Japanese Maple tree in winter also yields new growth from the surviving branches in a few weeks, but this growth is spindly and weak. More about the Japanese maple growth rate here.

Ques 1. Do Japanese Maples lose their leaves in the winter?

Ans. Japanese Maples are deciduous trees. Hence, between October and November, its leaves change color to fall color, and from November to December, the leaves drop.

Ques 2. Will my Japanese Maple come back after a freeze?

Ans. Freeze damage causes branch or tip dieback and even be concerning for the larger trunks if the cold is severe enough. But, as the year progresses, many Japanese Maple trees will grow back.

Ques 3. How cold is too cold for a Japanese Maple?

Ans. Typically, Japanese Maples thrive in regions wherein the average minimum temperature is above -10 degrees Fahrenheit, but some plants can tolerate temperatures down to -30F.